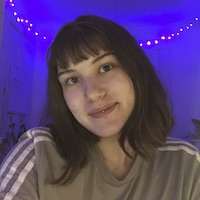 "I didn’t have an 'aha' moment where I thought 'Oh! This is where I’m supposed to be!' I had no idea how I would make a decision."

I’m going to college because I feel like I haven’t thoroughly learned about the stuff I care about: theater, creative writing, and cinema. I also can’t wait to take classes in subjects I never could in high school, like Japanese Cinema, or the History of Pirates.

At first, I was positive I wanted to attend a liberal arts college in a city. The University of Richmond was one of my top choices. It was in a warmer location than my home state. It was near a city, had great study abroad numbers, and offered every possible area of study I was interested in. When I toured, I saw more personality from the students, than pretty much any other school.

I also had a good number of women’s colleges on my list because I believe that the dynamic of a classroom changes when there are no boys in it. Learning in a space that was made specifically for female voices was super intriguing.

Can my activities and essay make up for my test scores?

My extracurriculars (plays, sketch comedy, mock trial) stood out more than my GPA and test scores. I did a lot of creative writing on my own, and so I hoped my essay would also distinguish me. But writing it was hellish! I wrote about the table read for my senior thesis play, and how opening it up to the whole cast was both terrifying and enlightening. I hoped it would show that I was passionate, hardworking, and able to overcome and learn from scary situations. I wrote 15 different drafts and changed it pretty drastically two days before my applications were due. By the end, I completely hated it.

A week before I submitted my applications, I sat in my room staring at my Common App, feeling like I could barely breathe. Suddenly, I was full of dread that I wouldn’t be happy at any of the colleges on my list. I thought I had no chance of getting in at Barnard, Emory, or Richmond, and all my other schools were either safeties (which I had a weird complex about not wanting to attend) or located in rural areas. I was scared of being isolated in the middle of nowhere without anyone I knew.

At the last minute, I applied to five more colleges that were either near cities, or schools where I knew people who were applying or attending. Ultimately, putting in the extra work gave me peace of mind.

When I found out I had been waitlisted by Richmond, I just sobbed in my kitchen. It felt like a punch in the gut. I had put so much work into my essays and interviews--even flying out to visit the school--it was the straw that broke the camel’s back.

After narrowing down by acceptances to the schools my family could afford, I was left with Agnes Scott, Emory, and Oberlin. I hadn’t toured these schools, so I visited them by myself over a two-day period.

Emory didn’t feel as welcoming as I had hoped, and I found its workaholic culture off-putting. Agnes Scott was a gorgeous little school, but I worried that I wouldn’t have as many arts opportunities there. At Oberlin I happened to meet a senior with my exact double major. She gave me a good sense of the classroom environment and opportunities, but I was still unsure. I didn’t have an “aha” moment where I thought “Oh! This is where I’m supposed to be!”

As I boarded the plane home, I texted my mom that I had no idea how I would make a decision.

Once I was in the air, I thought about what I wanted at the beginning, and the things that really mattered to me. I wanted a liberal arts college, I wanted a school that felt like a community, and I wanted a place where I could pursue the arts at an elevated level.

I thought about my experience visiting Oberlin—touring its classically beautiful campus, having dinner at midnight with two students who kept gushing about how much they loved the school, watching a play in the round put on by unbelievably talented student actors… and it finally clicked. I remember feeling this wave of relief. When my mom picked me up at the terminal, the first thing I told her was that I was choosing Oberlin.