Transition to College: Here’s What Students Have to Say About It

What did CollegeData students find most challenging about their freshman year of college, and what advice do they have for making the transition to college easier? Here are the results of CollegeData’s “Transition to College” Survey 2022!

Making the shift from high school to college isn’t easy for everyone. If you’re going through this transition now or will be in the near future, we thought it might be helpful to hear from students who have already gone through the transition-to-college process. In July of 2022, we surveyed* registered users of CollegeData who attended college during 2021-2022. Almost 80 percent had just completed their freshman year of college. We wanted to find out what surprised them most about college life and what helped them adjust.

When asked the question “What aspect of college were you least prepared for,” the responses fell into four main areas: academics, finances, social/personal, and finding balance between social life and academics. Below is more detail on how students responded within each category.

Almost 30 percent of the college students surveyed said they felt least prepared for the academic side of college. Of that group, 9 percent said they were most surprised by the amount of studying required to succeed in their classes.

“I had to read like never before,” one student responded. Said another: “I never studied as hard in high school as I did in my first year of college.”

Another 6 percent found exams to be the most challenging. “College exams are nothing like high school exams. I really had to study the material my teacher posted on Canvas and also read the book to get good grades.”

Close to 7 percent of the survey participants said that their academic workload was the biggest surprise. “I wasn’t expecting the workload of college to be so heavy as compared to high school,” one student responded. “It was very difficult for me to self-study as most of my courses required a lot of outside effort.”

Another 8 percent were unprepared for the level of class rigor. “I didn't expect the classes to be as fast paced as they were,” one student said. Another agreed. “College courses are a different breed. They are super time demanding and sometimes super difficult.” 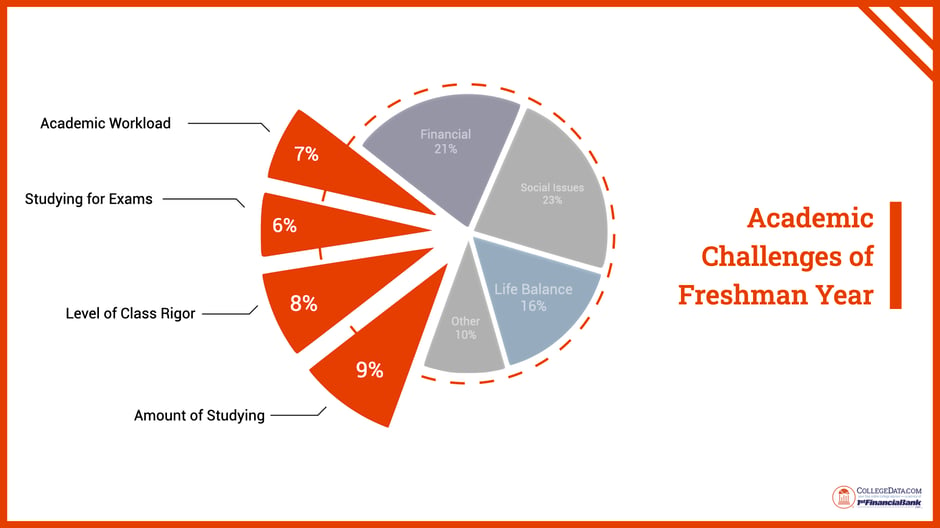 Studies have shown that many students have trouble acclimating to the pace and rigor of college-level work. In a 2019 survey of college freshmen conducted by the Higher Education Research Institute at UCLA, 37.9 percent of the students polled said they had difficulty adjusting to the academic demands of college.

Another survey, from 2021, of 2,000 college students from 108 institutions, revealed similar results. In this survey, which polled students about disruptions to their education during COVID-19, 23 percent of freshmen reported feeling very unprepared for college and another 35 percent reported feeling somewhat unprepared.

College Costs and Managing Money Were Another Challenge

Another 10 percent said they were most unprepared for college expenses. “I wasn't expecting to spend as much money on things that I had readily available at home (food, cleaning supplies, etc.),” said one student. 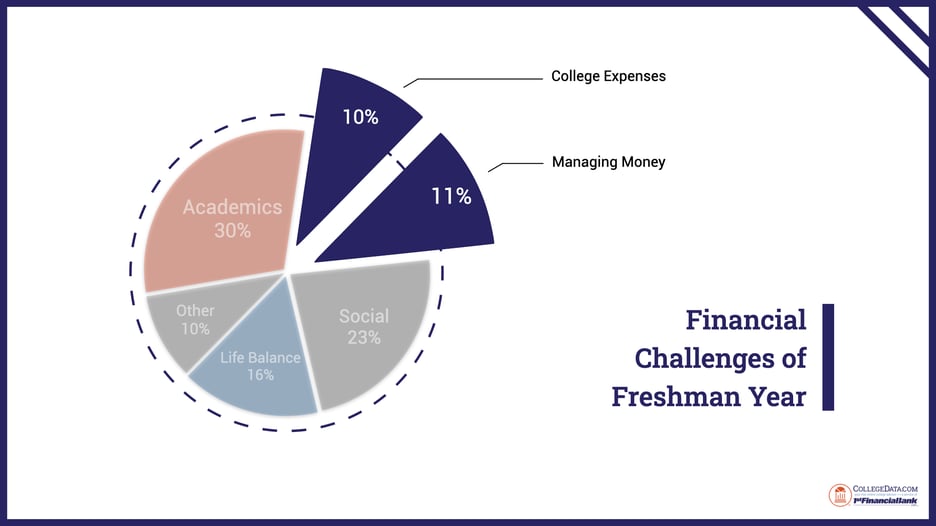 While students are usually prepared for and understand the costs of tuition and room and board, they can be thrown by the indirect costs of college, which include transportation, school supplies, entertainment and other non-tuition costs that students don’t pay directly to their college.

A recent study that included interviews with 150 college students found that 80 percent had encountered an unexpected indirect expense at least once. Colleges usually include some indirect expenses in their Cost of Attendance estimates, but indirect or hidden costs can vary depending on the school, your major and your situation.

A 2022 survey reported that about 40 percent of 1,500 college students surveyed have considered dropping out of college because of financial or academic challenges, and a majority of the students said they could not afford to pay for an additional college semester.

SOME STUDENTS STRUGGLE WITH THE SOCIAL ASPECTS OF COLLEGE

After experiencing the social isolation of the COVID pandemic, it’s not surprising that some students reported some difficulty adjusting socially to college. Just being around a lot of people in a classroom or a public space was a big change for some college freshmen. “COVID-19 kept me isolated the last few years, which made connecting with people much harder.”

Of the students we surveyed, 10 percent said they thought meeting new people or making friends in college was more challenging than they expected. “My first semester I really struggled with having no friends,” said one student. “It took me a semester to become more social and meet new people.”

“Making and maintaining friendships in college is difficult,” remarked another student. “There is no recess and no real dedicated social time in class. Once you find friends, maintaining them can be confusing, too.”

For 7 percent of survey respondents, living with roommates was their biggest adjustment and 6 percent said they struggled with living away from home for the first time. 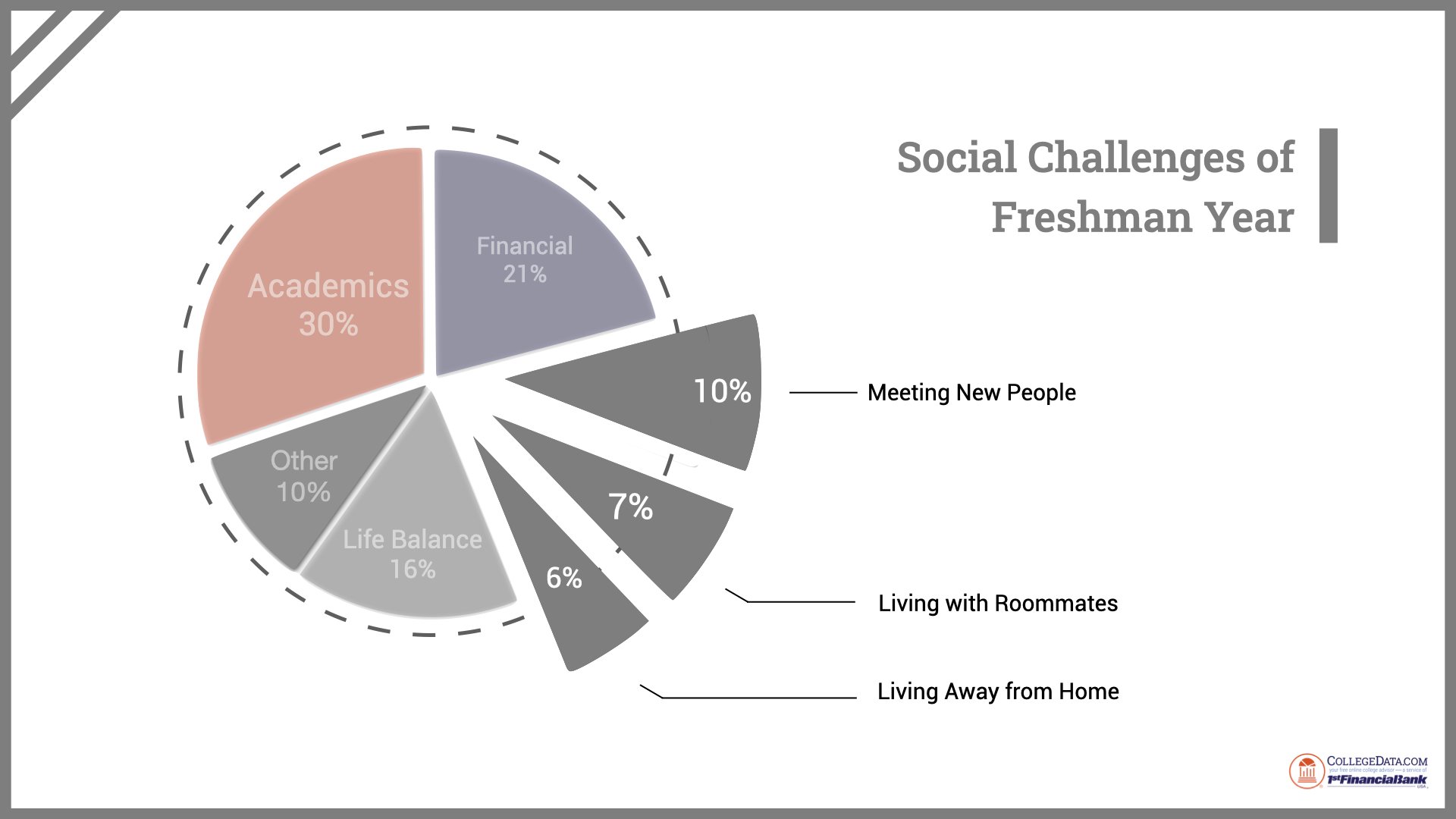 While college can present many exciting social and academic opportunities, all of this can be hard to juggle especially for incoming freshmen. Add a part-time job, family responsibilities, participation in clubs and/or sports, and you have a lot of balls in the air. It’s therefore not surprising that a portion of our survey-takers (16 percent) found it difficult to find life balance during their freshman year.

“I think starting college and having a greater amount of freedom made me forget about my academics,” explained one student. “I felt like I didn't make any friends because I was so focused on school and working,” added another. Of the college students we surveyed, 10 percent reported feeling unready for other aspects of college life, including adjusting to large or small class sizes, online learning, parenting, and commuting to campus.

What helped students prepare for the transition from high school to college?

We also asked our survey-takers to look back at the summer between high school and college and tell us the one thing they did during this period that helped prepare them for college life. Two answers stood out: working over the summer and attending freshman orientation.

Forty percent of students surveyed said working over the summer – either at a full- or part-time job or an internship related to a major – helped them prepare for the demands of being a college student, improved their time management and organizational skills, and gave them insight into a prospective career. “Getting a job is very helpful because it lets you build those 'life skills' which you’ll use every day in college,”  one student replied.

Seventeen percent of respondents found freshman orientation to be the most helpful in preparing them for college because it provided them the opportunity to meet fellow students and get an idea of academic expectations.

Survey respondents indicated a wide range of additional things that helped them prepare for college, including getting a head start with class assignments over the summer, meeting with other incoming students, and mastering some of the “adulting skills” you will use as a college freshman such as cooking, laundry, and creating a budget. “Start doing things without your parents help and learn how to live on your own,” advised one student. 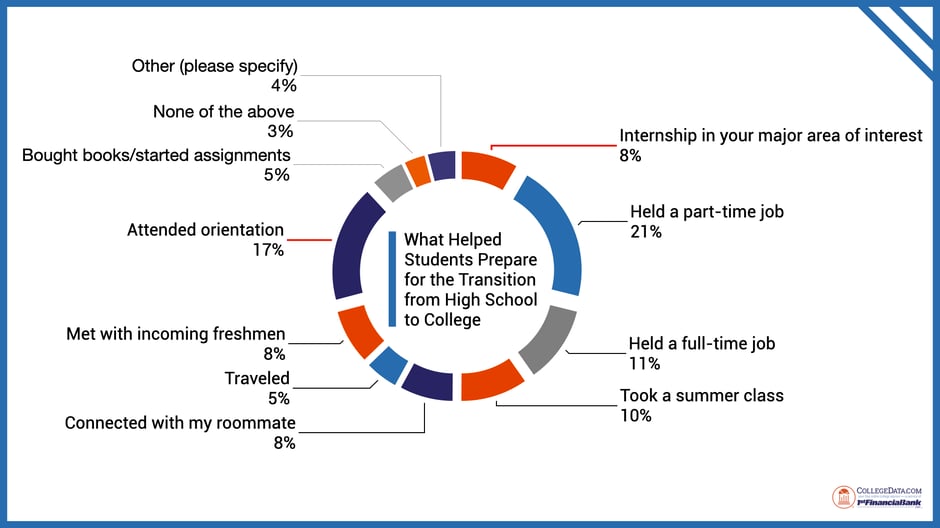 WHAT ON-CAMPUS RESOURCES DID FRESHMEN USE MOST – AND FIND MOST HELPFUL?

Most colleges offer a variety of resources to support students and ease the transition for college freshmen. These include mental health services, career centers and writing centers, just to name a few.

Which services did students take advantage of most? The highest number of students surveyed (19 percent) said they used campus tutoring and academic support services most often freshman year, followed by the financial aid office (15 percent). Study groups and professors’ office hours tied for third place. Students also named these same four resources as the most helpful. 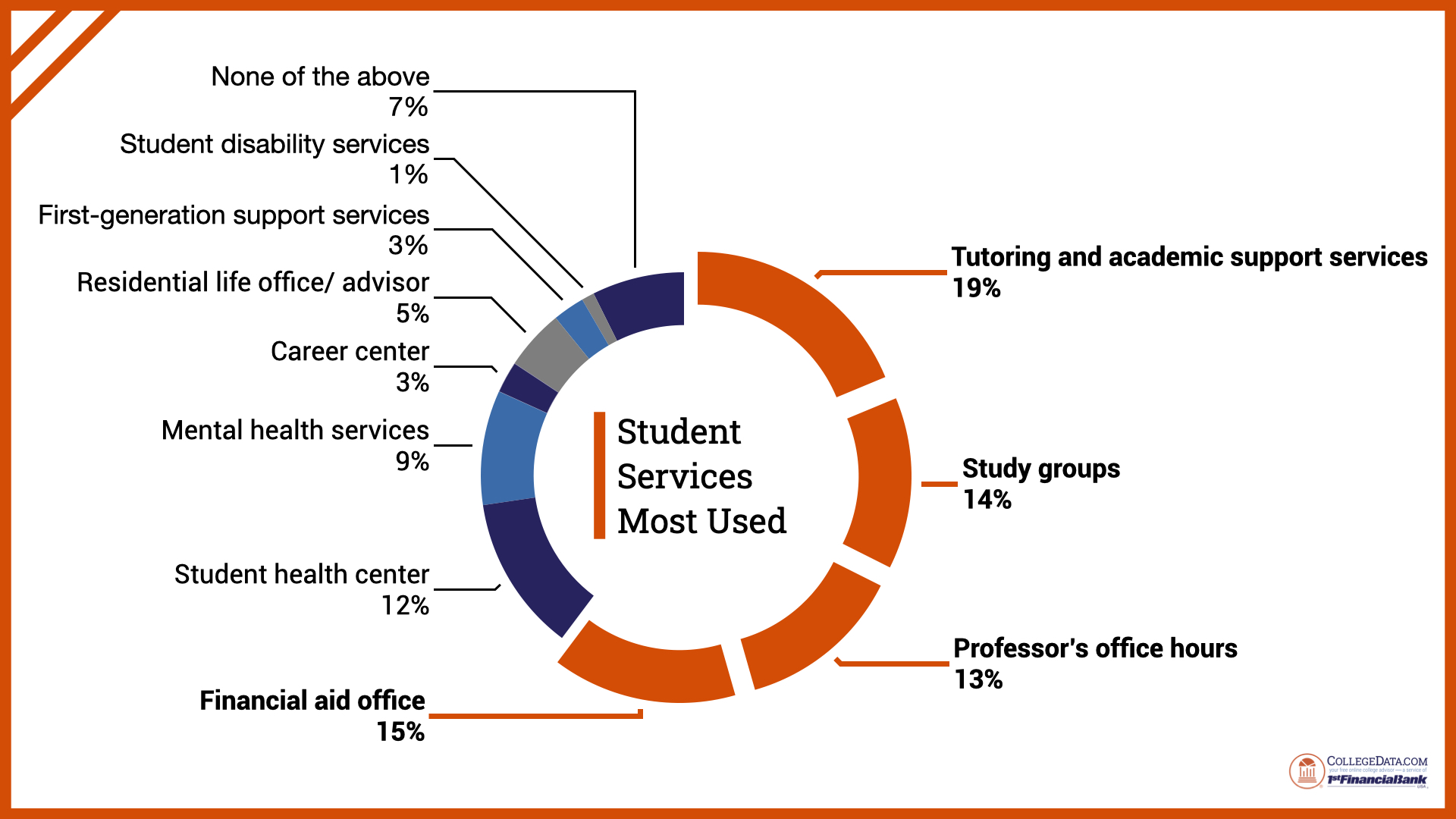 Since the beginning of the COVID-19 pandemic, colleges have reported a rise in demand for on-campus mental health services. One study found that 60 percent of college students are living with mental health disorders. As a result, many campuses are trying to expand their mental health support. 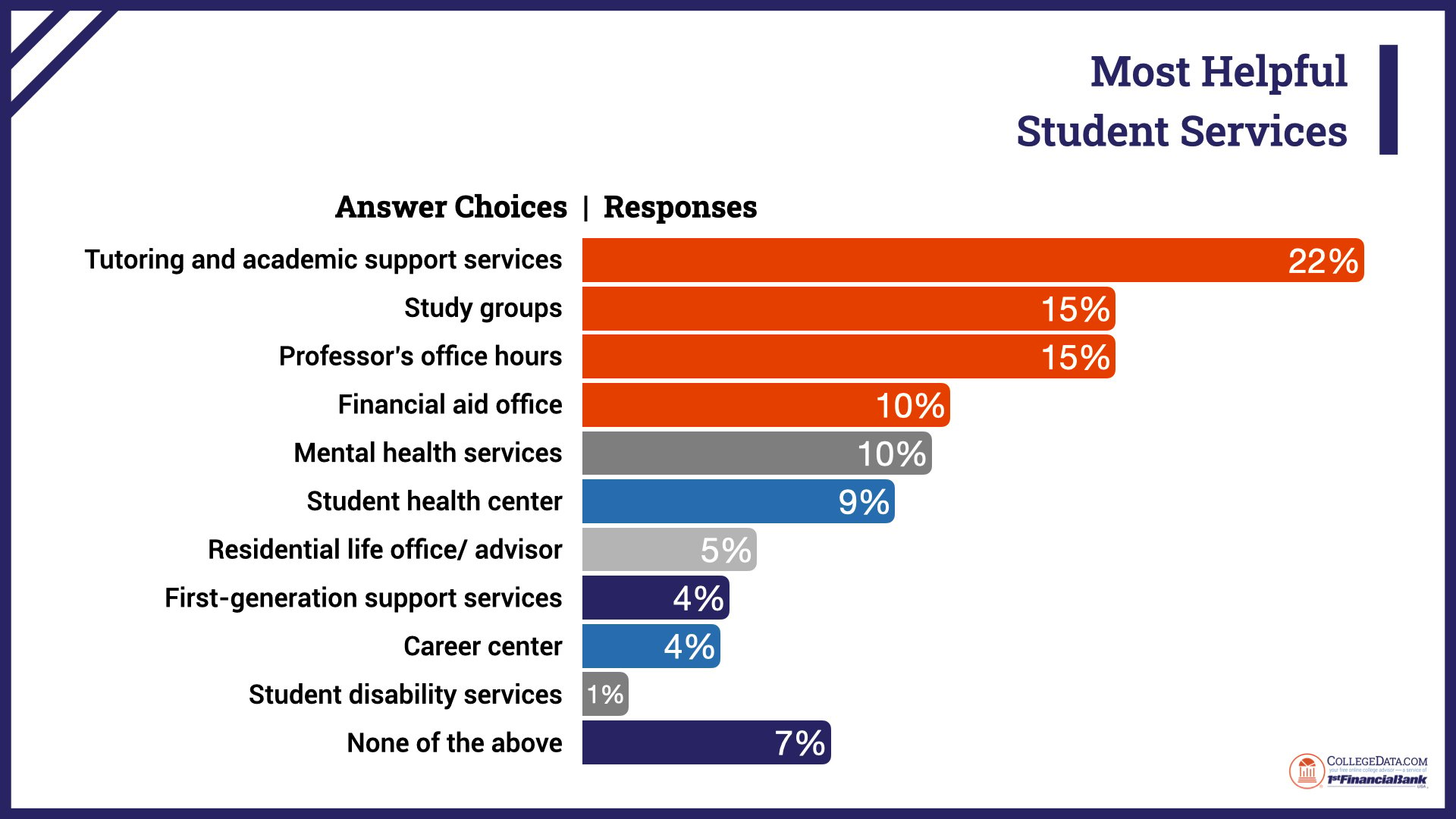 WHAT LIFE SKILLS DO YOU NEED TO SUCCEED FRESHMAN YEAR?

College is often a student’s first step into adulthood and first experience living on their own. Even if you’re living at home, college requires a higher level of organization, communication, and accountability. When we asked students what three life skills they used most or wish they had mastered prior to freshman year, the winners were time management, stress management and self-care, and money management.

Here are some of the comments survey-takers made about the importance of these skills.

Be Patient: It Can Take Time to Adjust to College

It can take students an entire year (or more) to feel comfortable living away from home, acclimate to college classes, make friends, and adjust to the new independence that college brings. As one student put it, “College is strange in that the highs are very high, but the lows are very low. Sometimes you feel like a kid living a life too adult for you, and sometimes you feel like an adult who’s really starting to come into their own.”

Whether you’re feeling anxious about starting college next year, or you’re in the process of acclimating to college life now, we hope you’ll keep these survey results and student experiences in mind, so you know that, whatever you might be going through, you’re probably not alone.

*Methodology: Survey results presented in this article were generated from an email survey of CollegeData registered users sent to college freshmen and students attending college in 2021-2022. A total of 395 CollegeData registrants completed the survey. Responses were provided anonymously.