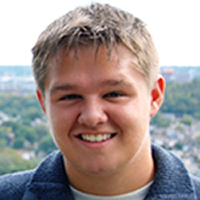 "Don’t base your college decision on first impressions. The second and third visits really made up my mind."

Getting waitlisted at my dream school turned out to be for the best. During the time I spent waiting for a decision, I found the right school for me.

It’s U-Minnesota all the way

When I started looking at colleges, I only considered geographic location. Loyola University was my top choice, simply because I wanted to live in Chicago. But then I toured University of Minnesota and everything changed. As soon as I stepped on U of M’s campus, I was in love. I saw all that a big university has to offer, and how important school spirit was to me. But most of all, U of M felt like home. I couldn’t see myself anywhere else.

My test scores were below average for U of M for my intended program (premed). But I applied anyway because almost every class I took in high school was AP, college, or honors. I also had 11 extracurriculars (leadership in two), community service, varsity athletics, and job experience. I hoped my record would show that, although I didn't get straight A's in all my courses, I was able to balance everything I did.

No News is Bad News?

I sent in my U of M application at the end of August and also applied early to Indiana University, Purdue, and Loyola. By November, I had heard from everyone (with acceptances!), except for U of M. It was great to be accepted to three colleges before Christmas break, but I thought not hearing from U of M was a bad sign. I continued to keep in touch with the U of M admissions office, so they realized how interested I was in attending.

In January, I still hadn’t heard from Minnesota, so I toured Purdue and Indiana University. I had visited Indiana once before, just one week after I toured U of M. But at that time, I was so in love with Minnesota, I was underwhelmed. On my second visit, Indiana really stood out. I liked that the campus was right in downtown Bloomington. Most of all, I loved the school spirit. I could tell that the students were really proud of IU and loved cheering on the Cream & Crimson.

In April, I was waitlisted at U of M. I was surprised--because I was expecting to be denied. Now I had a glimmer of hope that I’d still get in. But I decided to commit to Indiana, just in case things didn’t work out. I could always withdraw.

More time passed with no movement on the U of M waitlist. By now, I had attended an event at IU for admitted students, had gotten to know some of my classmates and professors, and found a roommate. I had gradually discovered more and more things I liked about IU (some, even more than U of M). I knew I would get a great education at IU, and it was a fraction of the cost of attending Minnesota as a non-resident. Finally, I realized that I no longer wanted to go to U of M, even if I were accepted. I was staying with Indiana!

When I was officially denied by U of M in May, it really broke me. Even though I had committed to IU, it was disappointing to know that I couldn’t have gone to Minnesota either way. I remember sitting at my desk and thinking, “Why am I not good enough? What could I have done differently?” Then I thought, U of M is just one college. Nine others accepted me. I must have something good going for me or they would have said no, too.

Later, I felt like everything had happened for a reason. Over the summer, I decided to change my major from premed to finance and marketing, and I discovered Indiana had one of the top business programs in the country. I had definitely ended up in the right place.

Don’t base your decision on first impressions. I’m really glad I visited IU a second and third time, because those visits really made up my mind. Most of all, I learned that if I trust myself and trust my gut, things will usually work out.

My parents and I are using savings to cover some college costs. I also received a few scholarships from local organizations. The rest will come from loans.

My grades and scores put me “on the fence” at most of the colleges I wanted to attend. If you feel like you’re below the average for a college you really want to go to, apply anyway. You never know what the admission counselors will see in you.