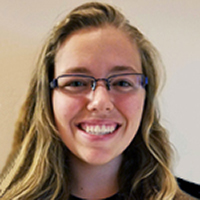 "My college counselor told me to stay true to my voice, which I found to be great advice -- both for my essays and in life!"

My final college decision started out as a struggle, but ended up being a very simple choice.

I ended up with 13 schools on my list. It felt ridiculous, but I didn’t know where I would get in, or what kind of financial aid offers I might receive. When I made a spreadsheet of all the essays required, it was daunting. But every college was on the list for a reason.

Outside the Ivies, Tufts was my favorite. After spending a weekend there during my senior year, I fell in love with the campus, the exciting Boston location, and the people. I also liked Georgetown for its School of Foreign Service, and Middlebury for its renowned foreign language program.

Is it Middlebury or Tufts?

In the end, I was accepted by seven schools. I was denied from two of my Ivies but waitlisted at Harvard, which I thought was exciting! Since I had applied to the Ivies with low expectations, even being considered by one of them was a huge accomplishment for me.

My decision came down to Middlebury and Tufts. I knew Tufts had everything I wanted, and they provided a generous aid package. I thought Middlebury was too small and rural. But it had a better foreign language program and their financial aid offer was incredible! I also worried that I was biased toward Tufts. I had spent a weekend there immersing myself in the school, whereas I had visited Middlebury only in the summer. I felt I should experience Middlebury in the same way before making my decision. So my mom and I booked tickets to Vermont.

Listening to my heart

The night before the trip, I got an email from a friend asking, "So, did you decide which school yet?" No one had actually asked me to make a final decision, and when I was confronted with the question, Tufts was the clear answer in my mind. I sat back and wondered why I was considering Middlebury when Tufts was my clear favorite. The things I disliked about Middlebury (location, smaller size) would not be changed by staying overnight at the school. In fact, nothing would change how much I wanted to go to Tufts!

I went downstairs and told my parents my dilemma: In my heart, I knew I would be happier at Tufts, and I was considering Middlebury mostly for its financial aid offer. When I began listing all the things I loved about Tufts over Middlebury, my parents could tell that I knew what I wanted. My mom and I reevaluated our trip to Middlebury and decided we didn’t need to go. She got up to cancel our plane tickets, joking about how much she was going to love visiting me in Boston.

My college counselor told me to stay true to my voice, which I found to be great advice -- both for my essays and in life! At first, I tried to mold the story in my applications to resemble the journey taken by my peers who had already graduated. I also tried to emulate the incredible essays that I had read online. But I realized that this just detracted from my own uniqueness. Once I focused on the things I really loved and felt passionate about, writing became easier and my applications presented a true picture of me.

Tufts financial aid package included need-based scholarships covering tuition and room and board. The rest will be covered by a $1,000 scholarship from a local foundation, work-study, loans, and my parents’ support.