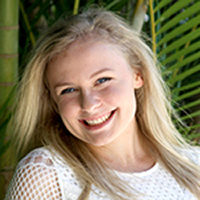 "When I compared myself to the kids online who were applying to Vanderbilt, I didn't have any of their accolades. I thought I wasn't qualified."

My college list changed drastically during high school. But one university remained my top choice: Vanderbilt. Yet I was so sure I wouldn’t get in, I enrolled in my local state college before I even received Vandy’s decision.

I fell in love with Vanderbilt in ninth grade, when an admissions rep came to my high school for a college fair. I loved its location in Tennessee and that it was so highly respected. When I learned about its major in Human and Organizational Development (HOD), which deals with how people interact, organize, and think, it really spoke to me.

I spent my high school career building a good foundation for my candidacy to Vanderbilt. But when I started my application, I worried that I wasn’t qualified. I had good grades and test scores, but when I compared myself to the kids online who were applying to Vanderbilt, I didn’t have any of their accolades. I had no grand musical talent or phenomenal science accomplishment.

I kept Vandy on my list, but it was my only real reach school. Most of my other colleges were safeties or match schools in my home state.

Settling for my safety schools

When I started receiving acceptances, each one was like a shiny new toy. I could see myself at every school, and University of South Florida emerged as a top contender. I would have to major in Sociology because USF didn’t have my major. But it was affordable, it was in one of my favorite cities, and my best friend was going there. Plus, I could attend its honors college, which in my mind justified giving up the academic rigor of Vanderbilt.

The more I learned about USF, the more comfortable I became with the idea of going there and the more I felt like I was just waiting for Vanderbilt’s rejection. I went from saying “I'll decide on a college after I hear from Vanderbilt” to thinking “It won't make a difference anyway".

Wanting to be done with the whole college process, I paid my deposit to USF and signed up for orientation. I was done! Now I could just enjoy the rest of my senior year.

Two weeks later while I was at the gym, I received my decision from Vanderbilt. I had to get off the treadmill because I was shocked. I was accepted! I called my parents right there. I could hear my dad say to my mom in disbelief, “She got accepted…!”

I couldn’t believe it. But now I felt obligated to attend USF. Everything was already set up. Everyone knew I was going there, and I had been assigned a room with my best friend which was going to be wonderful. Most of all, USF was so safe, so comfy, and so easy. Vanderbilt with its top-caliber students and academic rigor, felt scarier.

I knew that I needed to visit Vanderbilt and see how I felt. When I got there, everything I had seen or read about it was real -- and amazing! It was a prestigious university, but it wasn’t intimidating. Everyone I met was friendly, courteous, and welcoming; not at all arrogant. Most of all, it felt like everything I wanted to study for my major was right there -- including the faculty, the resources, and the infrastructure. At USF I doubted I could put together such a perfect program.

Knowing that I was willing to turn down USF, a school that I’d built up so many obligations for, made me all the more sure that I was making the right decision. I regret that my USF deposit won't be returned, but that is nothing compared to what I would feel if I didn't take a chance with Vanderbilt.

My lowest point was when I was completing my financial aid forms for Vanderbilt. I had technical problems and was getting really frustrated. I nearly closed out of the application and stopped, thinking, what’s the point if they are just going to reject me? Now I’m so glad I finished because I am going to college with that financial aid.

My best moment was when I called my grandparents to tell them I got accepted to Vanderbilt. They lived in Tennessee before moving to Florida,  and it’s really their home. When I told them, they started crying.

I thought that I had to be good at what everyone else was good at. But what’s important is to be good at doing the things you do. I didn’t realize it until later, but my college application had a theme. I wrote my essay about how I identify myself through my relationships with other people. All my extracurriculars build on my major -- being in student government, working on a political campaign, organizing volunteers. I was communicating with people all the time. And I was committed. I think Vanderbilt saw that I am passionate about what I want to do.

For a while, I wasn’t sure Vanderbilt was going to be affordable as my family’s EFC is high. But Vanderbilt is paying for all costs over my EFC with grants and scholarships (I have no loans). My parents agreed to cover our EFC, and I will contribute through work-study.